Endless stacks of reference materials are on their way out at UW-Madison libraries. So are study halls with long tables of silent, solitary students, and self-contained libraries for individual departments.

At a time when many books and journals are accessible online, when classes put a bigger emphasis on group work and when universities look to spur innovation by having people from different fields collaborate on research, UW-Madison is rethinking its libraries.

Long-term plans call for consolidating the dozens of libraries on campus, and developing hubs for broad collections of fields such as the humanities or sciences.

When it reopens next spring, the library will have reduced its collection of printed materials by about 60 percent and reconfigured its seating areas.

Learning Commons, as the space will be known, will boast five new “active learning classrooms,” according to the business school, as well as a finance lab and several new open study spaces and meeting rooms where students can work together.

“Instead of just having a whole bunch of tables and chairs, these are going to be collaborative spaces,” said Ed Van Gemert, UW-Madison’s vice provost for libraries and university librarian.

Active-learning classrooms are those that reorient learning spaces away from the traditional setup of an instructor at the front of the room and students in rows of forward-facing desks, said the business school’s chief communications officer, Meloney Linder. They’re defined by movable furniture pieces that make it easier to break students into groups, keeping them more engaged in class, Linder said.

The classrooms proved popular with students and instructors when the school first introduced them three years ago, she said.

“We immediately saw that there is a desire among both our teachers and our students to have this different type of learning,” Linder said.

Van Gemert said officials want to make changes similar to those underway at the business school across UW-Madison, as part of a master plan set to be released this fall that will guide the future of campus libraries over the next 20 to 25 years.

In general, he said, academic libraries today are placing far less of an emphasis on storing and accessing printed materials, and more on helping researchers navigate the sea of information they have access to.

The move away from “big study halls with these gigantic tables” is spreading too, he said.

“Solitary study is still important, but so is collaborative study,” Van Gemert said.

Perhaps the most noticeable change, though, will come from plans to consolidate UW-Madison’s many small, department-centric libraries.

That model was effective decades ago, when researchers needed to be physically close to printed reference materials for their field, Van Gemert said.

Now that researchers can access those same materials online, there is less of a need for them to be kept on shelves in department buildings, where they take up space that could be put to better use as classrooms or study areas, he said.

Materials from the business school’s library, for instance, will be moved to Memorial Library and, in the case of books that are rarely requested, an off-campus storage facility in Verona.

Van Gemert said the plans to consolidate UW-Madison’s libraries are being developed in collaboration with affected departments, and have not been driven by declining state funding — a trend the coming budget is set to reverse, but one that has led to cutbacks in other areas. UW-Madison has been working to consolidate its libraries for decades, he said, though he acknowledged the pace of doing so has accelerated in recent years.

State funding could play a major role in plans for the future, though.

The business school’s renovation is entirely funded by private donations, but schools and departments that can’t raise enough money from donors could have to rely on taxpayer dollars, Van Gemert said. Unlike campus dorms or unions, he added, the libraries don’t generate nearly enough of their own revenue to fund projects.

“We will be dependent upon both campus funding and state funding for the things we want to accomplish,” Van Gemert said. 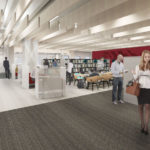 Read the full article at: http://host.madison.com/wsj/news/local/education/university/business-school-renovation-signals-broader-changes-for-uw-madison-libraries/article_93c6817f-9539-58b5-ac43-f36a4f9c3c54.html